That's weird... Most people are happy when there's dessert.

Gah!  Poor Priscilla at Thrifty Crafty Girl tried to do us all a favor and share a her quick, easy and delicious recipe for what she calls Cherry Crobbler with us...
(Yes, Crobbler.) 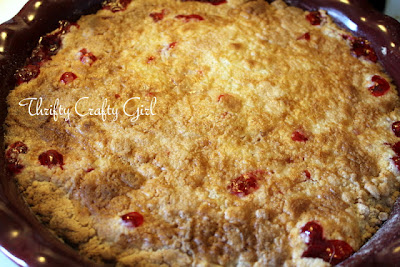 Someone did not appreciate Priscilla's generosity and took in upon herself to criticize this fabulous 3 ingredient dessert and to do a bit of name calling...

The Mean Commenter said:
"every pat of butter is 100 calories. i counted 18. so, that's 1800 calories in butter. the whole package of cake mix is 1000 calories. there are 680 calories in a whole can of cherry pie filling. so, technically, the entire pie is 3480. divided by 6 pieces is 580 calories a slice. that's if you really stick to eating just one slice. add in a scoop of vanilla ice cream tacks on another 150 to 200 calories.
oh yeah. you're a real thrifty, crafty, hefty girl.
better to have used real cherries, just a pat of butter and a few teaspoons of sugar and topped it off with a crumble made from old fashioned oats and cinnamon.
moving on. outta here. yuck."

Our Slammed Blogger Says:
Huh.  OK, is it my turn to talk now? Oh, it is? Super.  'Cause I have a couple things to say...
Let's start by saying that I never claimed this was healthy.  Here's a piece of news for you: a lot of desserts aren't healthy.  I know, it came as a total shock to me, too.  I'll let that heartbreak set in while I address my next point.
Did you just call me fat?  I believe you said "Hefty".  Oh, it's on now.  If you assume that just because I consume mass quantities of fat, sugar and salt I'm hefty, well then you've underestimated this Thrifty Crafty Girl.  I'm also assuming you think I sat down with the entire dish in my lap, consuming this dessert in its entirety without a spoon 'cause it gets in the way of my binging.  Well, I wanted to... but I was forced to share.
And I'll finish by saying this: I DON'T RECALL STUFFING A GUN TO YOUR RIBS AND FORCING YOU TO MAKE THIS RECIPE.  If I did that, I'd be crazy, now wouldn't I?  And if I were crazy, I'd leave ridiculous comments on blogs under the name 'Anonymous'.  And I just don't do that.  A better idea would be to have tried the version you suggested and put THAT in the comments... I'm all for having healthier versions of my recipes.  Not for me, since us hefty girls have to keep up the calorie consumption, but other people might like it.
And you're moving on outta here? Shame... I was looking forward to more crabby anonymous comments from you.

Viv Says:
Wow.  Priscilla seems to have it under control.  I think this time around I'll just offer up a wee bit of visual advice: 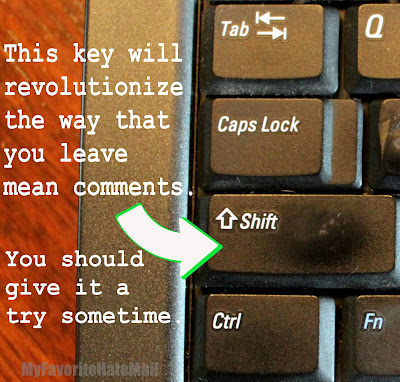 She can count calories and call names, but apparently isn't familiar with the workings of a keyboard.  Nice.

What do you say?

Just a troll looking for a reaction. It is a full time job for some of them just leaving nasty comments on blogs. DELETE and yes I am yelling.
BTW that looks very yummy but is definitely calling out for a scoop of good vanilla ice cream.

I'm going to make one and eat the whole thing now. With ice cream. All by myself. I hope she's happy.

Well I never. She got up on the wrong side of the butter stick didn't she? The blog author handled it so well. Good for her.

What happened to the motto: If you can't say something nice don't say anything at all... I think that goes for typing on blog comments too! This poor gal! I think her crobbler looks fabulous!

Dang. She acts like you made her eat it!

Hilarious!!! And I love Priscilla's response. Some people are so rude and honestly have nothing better to do with their time!

-Erin @ DIY On the Cheap

All I can say, is Annon is probably a miserable skinny B**** and yes, I used caps! EAT SOMETHING!

I love desert, and life is too short.

If someone called me fat for posting desserts, I'd lose it! Even Paula Deen doesn't eat the entirety of each dessert she makes all by herself. I'm pretty sure the mean commenter could have just adapted the recipe if she wanted to make it that badly.

Really? If you're looking for a mouthwatering dessert recipe, you best not be counting calories. My aunt makes a mean banana cream pudding and it's got about 400 calories in a single tablespoon. And you know what? We all eat it with ice cream.

Just because we enjoy a few extra calories now and then doesn't make us fat and you can share a healthier version without being rude.

Seriously, I'm not a violent person but some people need a good hearty throat punch. Clearly this is a case of extreme unhappiness that she clearly must spread. It's good to know that some people just browse the blogosphere leaving poison like that.

And honestly, who hears the word dessert and thinks "healthy?" It's dessert, it's supposed to be sinfully delicious - it's part of what makes life great.

I need a page like this on my blog!! God bless you!! ha ha

What's funny is that the torch wielding troll didn't even get her calculations right!

A quick google search told me that a single pat of butter is 36 calories each, making 18 pats of butter equal to 648 calories.

A standard box of white cake mix, as is without any other prep, is about 367 calories. She stated she used HALF the mix, bringing it down to about 184 calories.

A can of cherry pie filling is about 684 calories.

Altogether, you get a grand total of approximately 1516 calories, give or take a bit. Making 6 pieces come out to about 250 calories apiece. Still a heft hunk of caloric change but not nearly as bad as the troll makes it out to be.

So along with being rude and without knowledge of proper keyboard mechanics, the troll was also not very intelligent and over exaggerated for the sake of making a useless, unrequested (and un-cared about) point.

Why sugar coat it... what a nasty meanie.

But I censored myself.

Priscilla's response rocked! Very impressed with how she handled it! And I just pinned her recipe on Pinterest too. Don'tcha just love when angry trolls bring more interest to the blog post that got them angry in the first place? LOL

Hysterical that the Troll took what she felt was unhealthy and added a scoop of ice cream! And then added that to the calorie count! Hell, if she added some caramel sauce and whipped cream, she could get a REALLY big number!

The comment about the wrong side of the butter stick above is hilarious. I love it. Hahaha.
Boo to the nasty comment! But great response to it. LOL.

Why sugar coat it... what a nasty meanie.